Learn the Italian numbers and how to count from 0 to 99.

The numbers 0 to 19 are pretty easy in Italian; you just need to memorize them like any other vocabulary:

Note that with the exception of tre, all the single digit numbers have two syllables, the first of which is always stressed: Uno, DUe, QUAttro, etc.

For 11 through 19, the spelling of the Italian word for "ten," dieci, is modified slightly, as are many of the single digit words it’s attached to. For 11-16, dici follows the single digit, while for 17-19, it precedes it.

Venti and trenta lose their final vowel when followed by numbers that begin with a vowel (uno and otto).

As the only single syllable digit, tre takes on an acute accent to show that it’s the stressed syllable in 23, 33, etc.

Spelling and a bonus Italian idiom

They also lend themselves to an expression related to a milestone birthday. Since the "tens" numbers all end in –anta, when turning quaranta, it’s common to say entrare negli anta, meaning "to turn 40" (literally, "to enter the ‘-antas’ ").

Uno is used only when counting (uno, due, tre) or when it refers to a masculine noun but does not precede that noun:

Uno changes to un when used in front of a masculine noun:*

* Except when it’s followed by certain letters and letter combinations – learn more.

When it’s attached to a "tens" number, this shortening is optional – and is less common than the longer number:

Una is used for a single feminine noun:

When the noun begins with a vowel, una contracts to un’:

When it comes to "tens" numbers, una reverts back to the masculine or shortened form – again, the latter is less common: 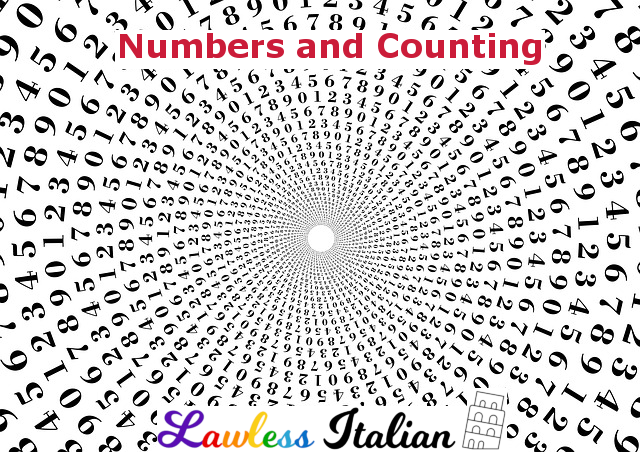 Ciao! I’m Evelyn Reid and I am utterly thrilled to be involved in the making of Lawless Italian. In addition to creating all the sound files, I handle social media, including mini tests every week.