In Italian, consonants can be divided into pure and impure sounds (or simple and complex sounds).* While both types can occur anywhere in a word, they only really matter, grammatically speaking, at the beginning of masculine nouns.

Pure or simple consonant sounds are those that are pronounced distinctly, with a single sound. When they’re found at the beginning of masculine nouns, they call for the default definite, indefinite, and partitive articles:

Letters and letter combinations with more than one sound are considered impure or complex, and require different masculine articles. This is the complete list:

If you like, you can just memorize this list and go about your day. Or if you’re curious, here’s more detail about the three groups these sounds can be divided into, and why they need special articles.

If the letter combinations gn, pn, ps, or s impura (sc, sf, sp, etc) were preceded by the normal articles, there would be three consonants in a row, which is just too difficult to pronounce.

The letters x and z are pronounced with a combination of two sounds, so need lo and dello for the same reason as above.

The letter i followed by a vowel and the letter y are semi-vowels, which are difficult to pronounce after the letter l. These words are uncommon.

* There doesn’t seem to be an Italian term that encompasses all of these sounds. S + consonant is commonly referred to as s impura or s complicata, so I’ve taken the liberty of extending this terminology to cover the whole group. If you know of a better – official – term, please let me know! 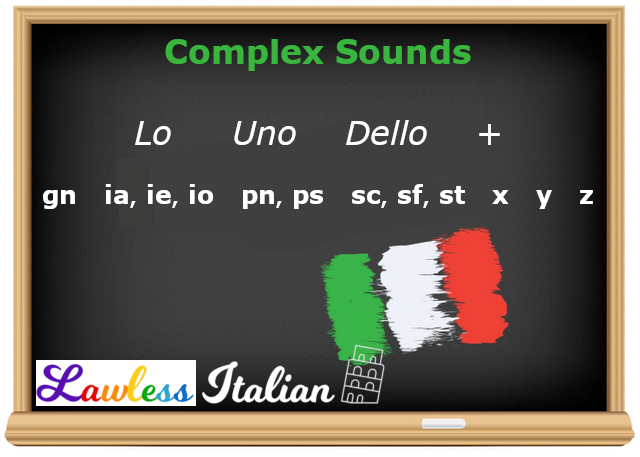