One of the eight parts of speech, a noun is commonly defined as "a person, place, or thing." If that seems vague, that’s because it is: nouns can be visible (water) or invisible (air), they can be concrete (books) or abstract (ideas). Some are commonplace (rocks), some are rare (diamonds), and others are non-existent (unobtainium). Generally speaking, if you can use "a," "the," "some," or "this" in front of any stand-alone word, it’s a noun.

In Italian, all nouns have a gender. Rocks and ideas are feminine, while books and diamonds are masculine. This can be hard to wrap your mind around, but it might help to think about gender in English, limited as it is. Girls and women are feminine, which is reflected grammatically in the use of "she" and "her," while boys and men are masculine: "he" and "his." The difference is that in Italian, grammatical gender often has nothing to do with biological gender.

It is absolutely essential to learn the gender of a noun at the same time as you learn the noun. The best way to do this is by learning an article with every noun, rather than just the noun itself. Don’t make vocabulary lists like this:

That way, the article will be attached to to the noun in your brain, and you won’t spend the next several years asking people (as those of us who did not learn genders and nouns together constantly do) "is ___ masculine or feminine?" Gender is an intrinsic part of Italian grammar – adjectives, certain pronouns, and even some verbs change to agree with the gender of the nouns they are used with, so by learning gender and nouns together, you’ll make all of these other aspects of Italian grammar that much easier.

That said, there are some tendencies in the gender of nouns, but there are always exceptions. Here are some patterns, but please don’t use these as a way to avoid learning the genders of nouns – just learn each word as gender + noun and then you’ll know them forever.

In addition, most Italian nouns that end in a consonant are masculine (and are usually borrowed from another language).

Like English nouns, most Italian nouns have singular and plural forms. In addition, Italian nouns referring to people and animals often have different masculine and feminine forms, which means that these nouns can have up to four forms – learn more. 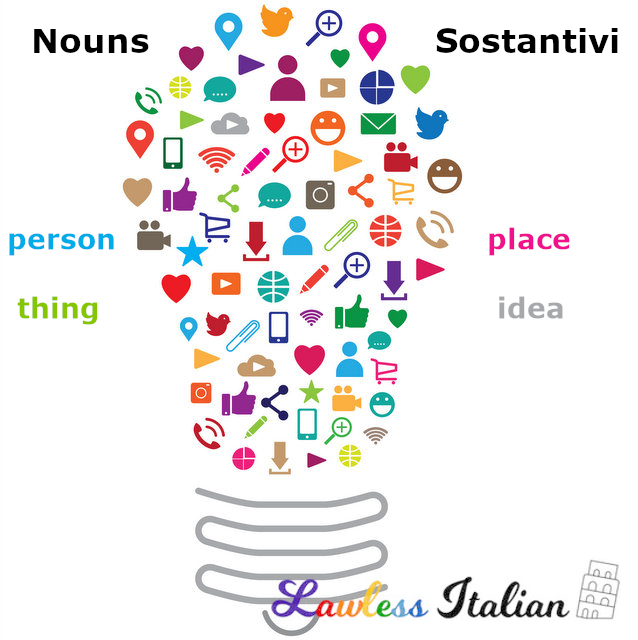